Videotape
Videotape is very much like audiotape. It is made of (0.02 mm thick) polyester plastic and works in basically the same way. Sound is encoded on a portion of tape and the picture is encoded as magnetic particles representing dots of various brightness ‘seen’ when the original picture was scanned for recording.

The information is recorded magnetically on tracks, diagonally across the tape. This method allows as large a surface area as possible to be involved in holding the recorded signals.

There have been three formats of videocassettes available in schools and libraries, none of which is compatible with the other. Each type of cassette requires a different type of videocassette recorder (VCR) to utilize it.

Videocassettes have tabs to prevent accidental erasure. A videocassette has only one tab because – unlike audiocassettes – information can be recorded on one side only.

Activity
Examine a videocassette and note the erasure tab. Open the top protective cover by depressing the pin at the top of the right hand side of the cassette and lift back the cover. Look at the videotape but do not touch it.

Recording systems
When a TV set receives its signal (either through the aerial or from a VCR), electronic circuitry translates it into sound and pictures. There are different systems or formats for transmitting TV signals. Different countries have different systems, the most common being:

Always check the videocassette to determine the type of recording system, although a videocassette brought overseas may not be labeled accordingly. You can get some VCRs to recognize a particular recording system. An organization that buys videotapes from overseas should be aware of the system used, as it must be compatible with the equipment that the library owns. Some modern VCRs have the capacity to play PAL, NTSC and SECAM tapes. Older TVs may not give the same quality picture when viewing a non-PAL tape. If a VCR is not multi-system:

Videocassette recorder (VCR)
How it works
Spiral (helical) scanning is used to read the information recorded on the videotape. The recording and playback heads are mounted on a rotating drum that is tilted so that the tape is fed diagonally across the drum.

The image information (video signal) is recorded in diagonal tracks across the face of the videotape, not along the length of the tape as it is on an audiotape. The drum spins, moving the heads to read the image information stored on the tape. The drum spins at about 30 revolutions per second (rps). Because the drum is tilted at an angle to the tape, the heads follow the diagonal tracks as the tape moves past. If the heads were still (as in audio recorders), you would need a tape 80km long to store a two hour movie, as the video signal contains perhaps 500 times more information than the sound signal (audio information). The mono audio information is recorded along the tape near the top edge, as this information takes up less space than the picture and it keeps in time with the image track. The control signal is also recorded along the tape near the top edge. The control signal aligns the heads with the tracks during playback. When you adjust the ‘tracking’ control on your VCR, you are adjusting the tape position so that the heads can read the tracks properly. Usually this is not necessary but if the tape is well-used, worn or stretched you may have to adjust the tracking. Some VCRs have automatic tracking adjustment. 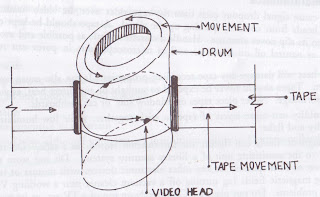 The heads are very small and delicate, and easily damaged through mishandling or contact with a rough surface.

Connectors
A VCR may be connected to a television set by a number of cables and connectors. Most domestic TV sets receive the picture via an aerial plugged into an aerial socket. This signal is commonly known as RF (radio frequency).

Another standard of connector is S-video. Some video recorders, camcorders and laser disc players are compatible with this standard. When connected to a television which has an S-video input, these products may allow better picture quality than can be achieved through normal video connectors. 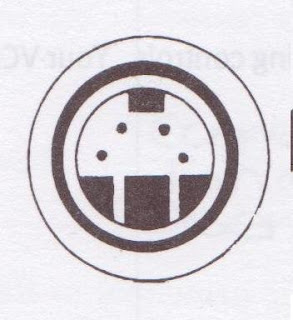 A popular way of connecting modern VCRs and TV sets is a standard aerial cable and direct video input using cables with RCA plugs. This enables either a mono signal (2 cables – 1 for video, 1 for mono sound) or a stereo signal (3 cables – 1 for video, 1 for left audio, 1 for right audio). The RCA plugs are coloured the same at each end of each cable, enabling easy connection between ‘Video out’ (on the VCR) and ‘Video in’ (on the TV), ‘Audio R(ight) out’ (on the VCR) and ‘Audio R(ight) in’ (on a stereo TV) and so on.

Examine a VCR/TV combination and determine which type of system is used to connect the equipment. Draw a diagram of how the VCR and TV are connected.

Examine a VCR and identify the following controls. Your VCR may not have all these controls. Some may be found on the remote control.

Troubleshooting
Exercise
Complete the following troubleshooting table, suggesting possible solutions to operating problems. You may find it useful to refer to a user manual.