The discipline concerned with basic principles of reality; methods for investigation and study; and the logical structures, systems, and interrelationships among all fields of knowledge.

Philosophy in everyday lives
Every institution of society is based on philosophic ideas:
The basic idea is of good understanding and treatment of others, although numerous countries have a different understanding.

A cohesive body of literature exists that may be classified as ‘philosophy’. However, philosophy attached to other subject areas may be spread throughout the library, thereby complicating access since all works will not be together physically.

The study of man’s beliefs and practices in relation to God, gods, or the supernatural.


Many facets of religious studies

“The religious studies curriculum has become, increasingly, a crazy quilt of courses encompassing many disciplines, eras, religions, languages, and methods of enquiry.”

Changes in study of religion

This information is often poorly documented and just as often very scattered
Housed in churches, provincial, and academic affiliated collections

Microform collections are very important
Older material may no longer be made. Microformed or scanned reproductions are cheaper to make and ensures that more access is available to materials that have been around for centuries

A body or collection of myths belonging to a people and addressing their origin, history, deities, ancestors, and heroes.

Deals with Gods and Goddesses and bigger than life collections, e.g. myth of creation. Associated with Greek and Roman mythology, myths and legends

1. The traditional beliefs, myths, tales, and practices of a people, transmitted orally. 2. The comparative study of folk knowledge and culture.

Problems of preservation and access
See: Folk Heritage Collections in Crisis http://www.clir.org/pubs/reports/pub96/contents.html
Oral traditions and folk songs recorded on tape will deteriorate over time; not to mention the disappearance of equipment to play
Catalogued by Rach at 9:19 AM No comments:

After scholars have communicated informally with colleagues via the invisible college, performed literature searches, and consulted their own professional reading collections, they develop a research design for a specific research project.

When the project is complete, the scholar may communicate the research results at a professional conference, and/or publish the article in a refereed journal, laying out the results of the research in a highly defined manner. Refereed journals have editorial boards and editors who carefully sift articles submitted to them and judge them by exciting standards, such as soundness of research methodology, quality of writing and presentation, and originality of ideas. In this sense the editors are exercising a gatekeeping function: that is, they control what gets published according to their view of what is valuable or appropriate to their discipline or sub-discipline at the time. This process of “quality control” is exercised by colleagues or other people in the same field and is therefore called peer review.

Journal articles are often later reviewed, and critiqued by other scholars familiar with the subject. If the original research article proves especially significant, its results may be discussed in a monograph (book) summarizing research on specific topics in the field.

Finally, though years later, the results may be mentioned in a specialized encyclopedia – by which time the results may have been significantly challenged or questioned by much newer research. Other researchers may find new ideas for research on this topic at various stages of this process; it is likely, though, that they will be plugged into the invisible college and therefore will not be dependent on older sources such as encyclopedias. This cyclical pattern of original research, followed by a chain of various publication formats, is known as the publication cycle.

There are, of course, variations on the basic pattern which reflect the differing orientations of the sciences, social sciences, and humanities. 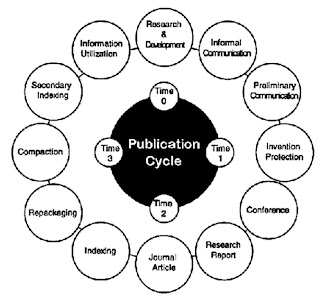 If you’ve read the “Discourse” module, you’ve learned about the main building blocks which shape all of the various academic disciplines – the invisible college, primary and secondary resources, discourse communities, and publication cycle.

Of course, there are vast difference in the orientation and approach to knowledge among these three schools of knowledge. Increasingly, scholars of all disciplines conduct “interdisciplinary research” which draws from not just one academic discipline, but two or more disciplines.

This is especially true in the Social Sciences. This approach to research recognizes that most research topics spill over into other disciplines. For example, the topic of “learning disabilities” pertains not only to education, but also psychology and even sociology. When you determine which academic discipline(s) your research draws on, you are also determining many of the qualities your project or paper will contain.

The word “discourse” is a fairly common one, although we may interchange it for the word “discussion” or “conversation” in everyday speech. To better understand the full meaning of the word, we will look at how it is defined within The Oxford English Dictionary. The Oxford English Dictionary provides us with several definitions of the term “discourse”. The first two definitions below are somewhat archaic now, but still hold relevance for out discussion:

Briefly think about what discourse, or conversation, between individuals requires. They need to speak the same language, for example. Discourse is further facilitated by shared assumptions, cultural cues, and values. Groups of people who communicate with these shared qualities can be called discourse communities.

Scholars and researchers share some distinctive habits and practices, especially in their methods of communicating with each other. Many rely heavily on their colleagues for information about new developments in their fields. They may confer by phone, communicate by e-mail, pass drafts of research articles back and forth by regular mail or e-mail, and attend conferences in their specialities where they learn by word-of-mouth about the latest research, teaching practices, or other trends in their disciplines.

More formal ways in which researchers communicate are through the publication of conference papers, journal articles and books. Publications of this type usually undergo a strict “peer review” which ensures the quality and accuracy of these professional, researched materials.