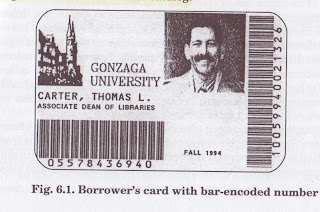 Anyone who shops in a grocery store will recognize the bar codes, which are similar to those that appear on most food packaging. Staff also apply a unique bar code to each item in the library’s collection. The item’s bar code number is linked to the item’s bibliographic record in the online catalogue.
To charge out an item, the customer presents the bar-coded identification card to the circulation attendant together with the material to charge out. The clerk scans the bar code on the identification card with a light pen or optical scanner, or may enter patron and item data via a keyboard. The computer automatically retrieves the patron record and checks the borrower’s eligibility to borrow materials (for example, no current excessive overdue fines is enrolled in school, and so forth). If the patron’s status report is satisfactory, the attendant scans in the bar code on each item to be charged out. Each item charged out is automatically linked to the patron’s record in the computer’s memory. The attendant returns the identification card and completes the transaction by placing a pre-printed date-due notice in the book or stamping the date-due slip in the book to remind the borrower of the items’ due dates.
To check in returned material, the staff member places the system in the discharge, or check-in mode. When the system reads the bar code on the item it clears the record from the computer’s memory unless the item is overdue, in which case the system automatically generates a fine notice. The borrower’s record is either cleared or attached to the overdue information. If another borrower has a reservation (hold) on the item the system displays this on the monitor and the clerk takes appropriate action to notify the requesting borrower.
At least one automated system has a portable unit with an independent power source. This allows staff to charge material out at remote locations, such as on a bookmobile, or use it as a backup system during a power failure. The unit can also be used to compile records of in-house use of reference and other materials.
Increasingly, computer-based circulation systems are linked with the library’s automated catalog in integrated systems. This allows customers to determine the circulation status of catalogued materials directly from the public terminals. It also allows customers to determine the circulation status of materials in the collections of other libraries with integrated systems. This is a valuable enhancement of service and is especially useful information for interlibrary loans and interlibrary referral.
Automated systems can also facilitate self-charging for library customers. Permitting borrowers to check out their own items frees circulation staff to perform other service functions. This service may also improve productivity and efficiency, reduce expenses, and allow libraries to handle increasing circulation activity without increasing staff while affording customers an option for self-service. The technologu is similar to that used in automatic teller machines. The borrower places a library card in the system. If the card is approved, instructions appear on how to position the item and scan the bar code. The system then verifies the circulation status of the item, checks it out, and desensitizes the security device. Date-due slips can be printed, and if a problem is encountered the customer is prompted to inquire at the circulation desk.
There is a list of tasks most computerized circulation systems can be programmed to perform. Each of these jobs is labour intensive and costly with a manual system. If a computer performs these tasks a library can improve service, and, perhaps, even save money:

1. identifies delinquent borrowers who have overdue materials and/or owe fines;
2. displays the reason for the delinquency;
3. alerts staff to lost or stolen identification cards when one is presented;
4. indicates when a reserve (hold) has been placed on an item;
5. displays all items currently checked out to a borrower and eliminates any record
of past circulation activity;
6. allows placement and notification of reserves (holds);
7. calculates fines and fees for overdue items;
8. prints recall notices;
9. automatically prints overdue and fee statements;
10. indicates whether a particular item is already checked out or is temporarily unavailable, for example at the bindery;
11. records and prints a variety of statistical information concerning collection use and circulation activities.

Automated systems are flexible and a library may tailor the functions cited above to meet its specific needs. The only way to understand an automated circulation system is to see one in operation or, better yet, use one in person. A visit to a successful operational system is far more useful than reading a description.
Manual circulation control systems
In a landmark 1961 study, George Fry & Associates identified 28 different circulation control study systems employed in American libraries (George Fry & Associates, Study of Circulation Control Systems: Public Libraries, College and University Libraries, Special Libraries (Chicago: Library Technology Project of the American Library Association, 1961). Most of them, however, are not widely used, and only two manual systems prevail today. They are the Gaylord system and the Newark system. Because computerised circulation systems are now the norm, the general descriptions of the Gaylord and Newark systems will be discussed only.
The Newark system
The Newark circulation control system is the most widely used manual system in the United States. It is simple to use for both borrowers and staff and is suitable for both small and medium-sized libraries. The system requires no expensive equipment. There are two variations of the system: (1) self-charge, which requires borrower participation; and (2) staff-charge, with no borrower participation. 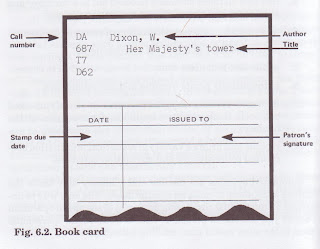 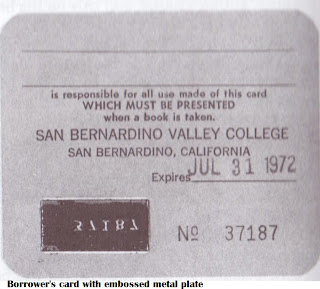 WOW. Thanks. I know this is several years old, but it is still useful information for a current LIS student.

thanks a lot. this really help me in my thesis proposal.

thanks for this information it has really helped me as a LIS student from Makerere university,uganda